Solargraphy is an amazing technique I stumbled upon some time ago. It involves using pinhole-cameras fixed for days, weeks or even months, which record the track of the sun across the sky. Obviously, the sun is lower in winter and higher in summer, so a six-month exposure will result in the maximum number of tracks recorded, as the sun goes from low to high in the sky (or vice versa).

35mm and black peppercorn tubs used as cameras, loaded and ready to deploy!

The characteristic inverted-U shape is a result of this tracking, combined with the fact that the pinhole cameras used have a fish-eye-‘lens’ (very wide angle of view), which distorts the image increasingly as you get off-centre. Check our my gallery here.

You can use pretty much any light-tight box (with the interior sprayed black to prevent internal reflections) to build a pinhole camera, but for solargraphy, it obviously has to be capable of surviving outdoors for up to six months, so a shoe-box will not do for this. I use old 35mm film tubs (the black ones), which are getting increasingly harder to obtain – if anyone has some old ones hanging around, please leave me a message here as I could use some spares. I also found that Tesco own-brand black peppercorns tubs are rather good, being black plastic, and these are my medium-format cameras! The pinhole is made in thick aluminium foil or thin metal: My local store sells a very cheap (and almost inedible!) flapjack in a robust foil tray for £1. This will last me some time, I suspect, and a thin pin (or similar needle) is used for making a hole. Then, the tub is sealed – the 35mm ones are ok as-is; I use lots of brown parcel-tape on the larger ones. I thought of sealing them in polythene too, but any water which does get in will then be trapped. It’s a crap-shoot at the end of the day; imagine what the weather will throw at them over the months. Here is my latest batch under construction: 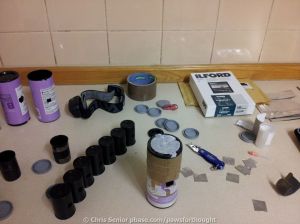 pinhole cameras for solargraphy, under construction

The ‘film’ is actually black and white printing paper (which needs loading in the dark, so I bought a head-torch with red LED specially for this): This is fairly insensitive to light, hence the long exposures which are possible. No chemicals are involved, as this film can then be removed form the camera and scanned to a computer. I guess you could fix the image on the paper, but once I have a digital ‘negative’, I don’t really see the point. This requires making positive and reversing on Photoshop (or whatever you use), and then some ‘tweaking’ can begin of curves, levels, colours, and such. I’m not trying to give a step-by-step guide here, just explain the basics and maybe get you interested: I actually enjoy this stage, cleaning up the image some. And from an artistic standpoint, I prefer the larger tubs, as they are harder to keep free of water or condensation: This can result in some interesting watermarking of the paper, which can be increased on the computer. I sometimes treat them to a pseudo-HDR process using Dynamic-Photo HDR, which can do some very interesting things to the colours, as here.

The main difference this year is that I have placed some cameras ‘in the wild’: Having a restored deer-park within strolling distance is very nice indeed, and since I know a guy who works there, and is also a photog, I asked him about doing this. He was happy to help, and so we spent an hour or so this afternoon finding some likely spots. The hardest part is securing a circular tub to a bit of wood, and then finding somewhere to locate this, with a good view of the sky and not too obviously public. Trees sound perfect, but remember that there will be foliage come spring! So, I tend to place two or three cameras in each spot, pointing in slightly different directions, and with the advantage that the lower ones are getting some protection from those above. I think ideally, a kind of frontless bird-box could be better, providing some protection and making them look less obviously ‘foreign’ if spotted. That may be something to think about for mid-summer, along with taking something to stand on, so that they are out of reach. OK, distinct lack of planning evident here, but although I had this in mind, I’ve been busy with work, it was only as a result of a chance meeting a couple of days back that I was up there at all.

Pinhole camera ‘in the wild’. Will it survive? Time will tell

So, we shall see. Three sets of cameras deployed; two lots of two 35mm tubs and one medium-format peppercorn tub. It is the latter I have the greatest hope for, as it is in a less visible location, and pointing at a rather splendid tree too. Of course, that assumes I have secured it adequately to the fence post, and that it survives the weather (or at least sufficiently to be artistic). Anyway, it’s a different way to mark the sun’s low-point of the year and the start of a return to lighter days. Check back in six months for the results!