Film SLRs … where are they now? Oh, here they are …

I paid a visit to my local camera-store today, as thanks to the joy of modern social-networking, I had seen a post on Facebook that they were having a table-top sale. I was curious to see exactly what was there, in case there was any gear shouting ‘buy me!’. What I saw was, in fact, several tables, all full of old film SLRs, lenses, cases, motor-drives, flash-guns, batteries, filters, pretty much any bits you could imagine, plus some vintage cameras too. 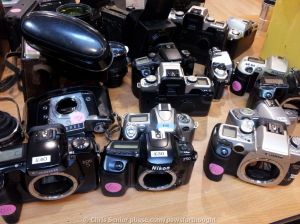 Consigned to the bargain-bin, old film SLRs have definitely had their day

… yes, all that lovely old gear that I would once have given my eye-teeth to get hold of, now going for an absolute song. OK, I cringed at all the lenses and bodies with no caps on, attracting dust, dirt and fingerprints, but I suspect that was not going to be a major issue in their immediate future, give how full the tables looked after almost a full week of the sale being on. 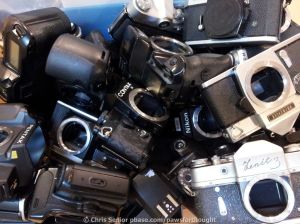 After all, who uses film any more these days? OK, at those prices, it may seem a bargain, but cast your mind back to how much the cost of film could be for a major vacation or expedition, or if you wanted to shoot the same number of frames that the pros did, with those bulk-film backs attached, like a couple of soup-cans strapped to the rear of the camera! And think how may frames you take now with digital technology  to be sure you ‘nailed it’, and how much that would cost. Maybe doesn’t seem such a bargain now, perhaps? 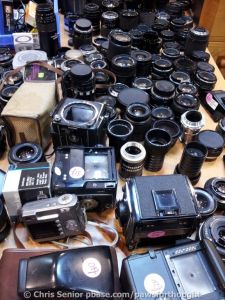 Old lenses and camera bits, all going for next to nothing

Still, there was certainly no shortage of choice, and I did find myself mentally assembling a new 35mm system or four whilst browsing. Or maybe something in a larger format, if you have the strength to lug it around … 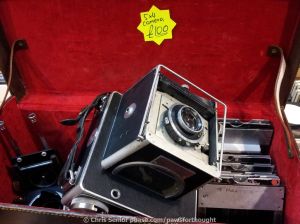 In the end, a little digging around unearthed all the SLRs I have ever owned (well done that member of staff for pointing out the EOS30 I purchased there a dozen or so years ago; now that’s service!). Total cost today? £20. Sob! … yes, a Yashica TL Electro and Canon A1 for a fiver each, plus the EOS30 for a tenner. Wow! That said, I still own all but the Yashica, plus lenses and other bits also. OK, I should probably have offloaded the EOS30 whilst it was still worth something, once I got my paws on a Canon 300D (Digital Rebel, in some regions), my first DSLR. But I retired the A1 and swore I would hang on to it, both for sentimental reasons and in case I ever had the urge to go back to 35mm for any reason. Hasn’t happened yet though. I do love digital, but never say never and all that. 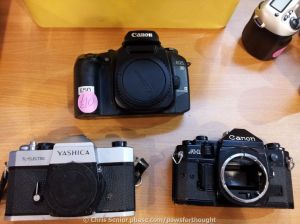 Whilst experiencing all that nostalgia, I was also aware of the convenience of taking my phone out of my pocket and grabbing these images, almost without thinking. Yes, the technology has certainly moved on apace, and perhaps no bad thing. I meant to ask what would happen to all the old gear left over after the sale, and presumably taking up valuable space in the store, but I didn’t have the heart. I think I can guess what the future holds for it, and it probably won’t be a nice museum display somewhere. Still, an interesting stroll down memory lane for sure.